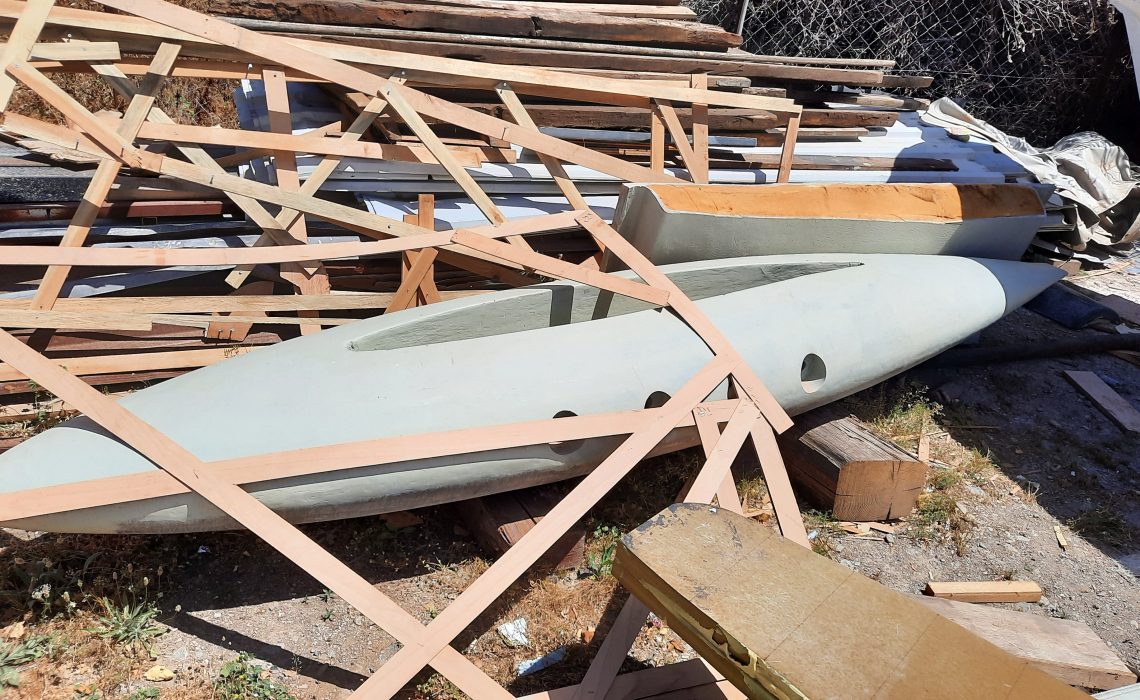 After 6 months in the yard with Dennis working on the boat alone, it was time to take some action. Whether it was good action or bad action, it was action nonetheless. Through a Facebook group we found a person who knew a “boat builder”. We reached out to this boat builder who recommended with move the boat to the yard where he is building his boat. As it turned out, it was across the street. 200m away but still a 2500TL (USD350) move. And of course, a 4000TL move back, but we will get to that later.

With a discussion and signed agreement in place, we moved the boat and container across the street. CAGLAR Yat is owned by Murat Caglar. His long-time friend Akin is the hands-on-the-ground ‘managing’ the 5 kids that work there. In concept what they are trying to do is great. Have some young enthusiastic kids working on boat projects. Teach them and let them learn through doing. Only one problem. There is no teacher.

During the 6 weeks, INDININI spent there, the problems that arose were ones you just would not see in a business that had any common sense or professionalism.

It didn’t take long to get off on the wrong foot, only about 10 days. They started by making some polyester fibreglass panels to be used for the ceiling of the boat. They coloured the Gelcoat, sprayed it, waited(not long enough), laid up a couple of layers of fibreglass and popped it off the next day. What happened next is the key indicator of how this place works and the real downfall of everything that followed.

Now if you were to take the time, effort and materials to create something, most normal people would respect their work, take pride in their work, and take care of their work. Not at CAGLAR Yatmistake. Put it up against the wall and stack plywood on it, or throw it on the ground and walk on it.

When I saw the way they treated the materials that were to go into INDININI, I was so set back and upset that I walked over and pushed the plywood off and onto the ground. Of course, big clouds of dirt, dust, fibreglass sanding powder and paint scraps flew into the air. It is a complete mess. How can kids….umm i mean apprentices learn if they have no one to teach them the fundamental basics…they cant.

So during the time at this yard, the boat experienced 3 scratches from aft to bow on the starboard side. A big dent starboard aft probably from where they cut long pieces of wood, a big chunk on the deck corner in the same aft starboard area and unfortunately because of the move, straps pressing into the paint and filler causing substantial dents. Some dents can be accepted and overlooked but these ones 8cm long and 3mm deep are outstanding reminders of the experience that will need to be fixed at some point so we can remove any reminders from these experiences.

5 weeks in and they started working on a mast that was 2 meters beside INDININI. A 15 knot wind was blowing toward the boat. This might not be such a big issue except the work they were doing was sanding and grinding with a grinder and then……they bring out a welding machine. So i walk over and ask them not to do this work. Soon after they come over with a big blue tarp and say they are going to hold it up so it shields INDININI. I state that the welds could fall on the tarp and catch fire. Just then a big gust of wind comes up resulting in the tarp becoming a big flag and flapping into the nicely painted side of INDININI. I tell them to get back, I start yelling for them to move back, I start swearing at them to move back. Akin the ‘boss’ comes running over from the tea room blind to what has happened and instead of having a duty of care to his customer’s boat in the yard, he starts yelling at me and telling me to pack up the boat and container and exit the yard by 7pm. And that was my Friday, June 5th.

So realizing that trying to negotiate or discuss a situation like this with an individual that is completely oblivious to the actual happens, I went in the next morning to outline the terms in which the prepayments would be applied and to determine the move time. I arrived and sat at the tea table, Akins placement for 90% of the time during the day. I sat there with Murat Caglar the owner and Akin came and sat down. While talking professionally and calmly with Murat, Akin suddenly stands up and starts screaming the F word the best he can in his Turkish accent while taking swings at me in the air and practicing his shadow boxing. What a way to treat your customers. Well, I stood up and walked away.

Later that day, the adults sat together and we discussed the payments. At that stage, all we wanted to do was to leave the garbage dump they called a boat yard. There was a 10,000TL upfront payment and the move to and from the yard cost 6,000TL. For this, INDININI received 8 fibreglass hatch surrounds and 8 pieces of painted plywood strips on the galley ceiling. Not what I would call a good deal or fair deal, but given that service is not a priority I referred to my previous goal of just getting the heck out of there.

The move took place 3 days later on 9-Jun. INDININI has never touched the water, but she has been lifted, trucked and move 6 times online. This was the worst. Although no big problems, the small ones will take time and skill to fix. Our new boat and the newly painted boat are scratched, beat up and certainly doesn’t look new anymore. Yes of course these are superficial issues but trying to fix a small crack in the paint and filler will require taking that area right back to the aluminium, sanding, priming, filling, sanding, priming, sanding and painting all over again.

Lesson learnt…if you want to deal with money, you need to speak monkey and pay with banannas.